PASADENA, Calif.—A catastrophic landslide 22,500 years ago dammed the upper reaches of northern California's Eel River, forming a 30-mile-long lake—which has since disappeared—and leaving a living legacy found today in the genes of the region's steelhead trout, according to scientists at the California Institute of Technology (Caltech) and the University of Oregon.

The river today is 200 miles long and carved into the ground from high in the California Coast Ranges to its mouth on the Pacific Ocean in Humboldt County.

The evidence for the ancient landslide—which, scientists say, blocked the river with a 400-foot wall of loose rock and debris—is detailed this week in a paper appearing online ahead of print in the Proceedings of the National Academy of Sciences. The study provides a rare glimpse into the geological and ecological history of this rapidly evolving mountainous region.

According to Benjamin H. Mackey, lead author of the study and a postdoctoral researcher at Caltech, the findings help to explain emerging evidence from other studies that show a dramatic decrease in the amount of sediment deposited from the river in the ocean just off shore at about the same time period.

Mackey and his colleagues were drawn to the Eel River, which is among the most-studied erosion systems in the world, to study large, slow-moving landslides. "While analyzing the elevation of terraces along the river, we discovered they clustered at a common elevation rather than decreasing in elevation downstream, paralleling the river profile, as would be expected for river terraces," he says. "This was the first sign of something unusual, and it clued us in to the possibility of an ancient lake."

By combining the findings from their field investigations with analysis of the topographic data provided by the LiDAR mapping, the team was able to identify a large landslide scar on the flank of a nearby peak, and detect subtle shorelines upstream of the landslide. The researchers suggest that a landslide in this area would have been capable of damming the river and creating a lake. An outcrop of finely laminated lake sediments discovered in a tributary stream provided compelling physical evidence for the lake's existence. 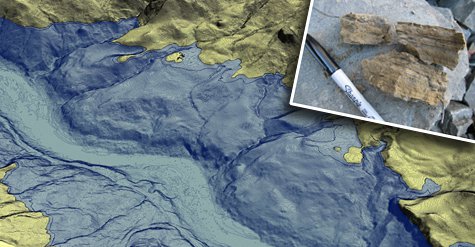 An image constructed from high-resolution topography acquired via LiDAR remote sensing shows an oblique view of the reconstructed lake surface (transparent blue). The modern bed of the Eel River is the broad flat area across the center-left of the image. The inset shows sediment found upstream of the dam and indicate deposition in still water, typical of a lake environment. Charcoal within these sediments was radiocarbon dated to estimate the time of lake emplacement at 22,500 years ago. Credit: California Institute of Technology

"Perhaps of most interest, the presence of this landslide dam also provides an explanation for the results of previous research on the genetics of steelhead trout in the Eel River," says Mackey, referring to a 1999 study by the U.S. Forest Service. In that study, researchers found a striking relationship between two types of ocean-going steelhead in the river—a genetic similarity not seen among summer-run and winter-run steelhead in other nearby rivers.

An interbreeding of the two fish, in a process known as genetic introgression, may have occurred among the fish brought together while the river was dammed, Mackey says. "The dam likely would have been impassable to the fish migrating upstream, meaning both ecotypes would have been forced to spawn and inadvertently interbreed downstream of the dam," he explains. "This period of gene flow between the two types of steelhead can explain the genetic similarity observed today."

Once the dam burst, the fish would have reoccupied their preferred spawning grounds and resumed different genetic trajectories, he adds.

"The damming of the river was a dramatic, punctuated affair that greatly altered the landscape," says coauthor Joshua J. Roering, an associate professor of geological sciences at the University of Oregon. "Although current physical evidence for the landslide dam and paleolake is subtle, its effects are recorded in the Pacific Ocean and persist in the genetic makeup of today's Eel River steelhead. It's rare for scientists to be able to connect the dots between such diverse and widely felt phenomena."

The lake formed by the landslide, researchers theorize, covered about 12 square miles. After the dam was breached, the flow of water would have generated one of North America's largest landslide-dam outburst floods. Landslide activity and erosion have erased much of the evidence for the now-gone lake. Without the acquisition of LiDAR mapping, the lake's existence may have never been discovered, researchers say.

"This was a remarkable discovery, since large lakes in steep, rapidly uplifting mountain terrain are rare," says Michael P. Lamb, assistant professor of geology at Caltech and coauthor of the study. "Moreover, high erosion rates tend to erase evidence that past lakes ever existed. Ben was able to piece together subtle pieces of geologic evidence from landslides to shorelines to show that this lake existed, and that its presence is still felt thousands of years after its demise in local fish populations and in the marine sedimentary record."

The National Center for Airborne Laser Mapping provided the LiDAR data used in the project. Funding for the study, "Landslide-dammed paleolake perturbs marine sedimentation and drives genetic change in anadromous fish," was provided by the National Science Foundation and the Keck Institute for Space Studies at Caltech. 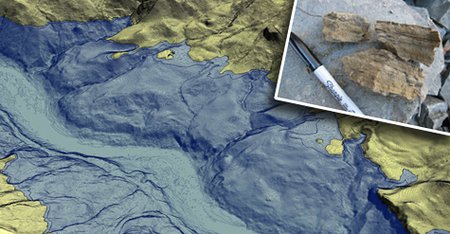 An image constructed from high-resolution topography acquired via LiDAR remote sensing shows an oblique view of the reconstructed lake surface (transparent blue). The modern bed of the Eel River is the broad flat area across the center-left of the image. The inset shows sediment found upstream of the dam and indicate deposition in still water, typical of a lake environment. Charcoal within these sediments was radiocarbon dated to estimate the time of lake emplacement at 22,500 years ago. Credit: California Institute of Technology 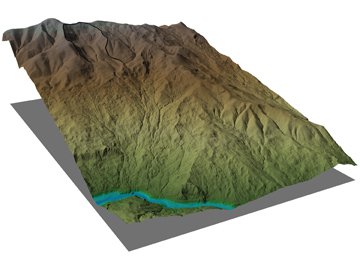 An illustration of Nefus Peak (top left) shows the site of the landslide dam. The modern Eel River is shown in blue. The landslide scar is preserved on the upper slopes, and highlighted in black. The landslide dammed the river with a 400-foot tall wall of rock and debris approximately 22,500 years ago. Much of the evidence for the dam has since been removed by erosion. Credit: California Institute of Technology
Image Lightbox
Subscribe
The Caltech Weekly