New Flume On the Block

Last Wednesday morning, Caltech received a rather large delivery. About 50 feet long and 5 feet wide, a big black chunk of metal was unloaded from a truck and slowly pushed into the Central Engineering Services Building.

The 30,000-pound shipment, arriving from Wisconsin, was a giant chute, the showpiece of the new Earth Surface Dynamics Laboratory—also called the Flume Lab—that's being assembled in the warehouse. Michael Lamb, assistant professor of geology, along with a team of engineers and geologists, had been designing the new facility for more than three years. And after more than two years of designing, building, and testing, the main component finally arrived, putting the "flume" in Flume Lab.

Once completed, the lab will be a state-of-the-art facility used by Lamb and his colleagues to study how water and sediment flow in carefully controlled settings—a near-impossible task in nature. Only a handful of labs like this exist in the world, Lamb says. From these experiments, the researchers hope to learn more about the dangers of mudslides and other debris flows—hopefully saving lives as a result. They will also study the role of river flows and erosion in climate change and try to understand the fundamental processes that shape Earth's landscape.

Work on the lab space has been under way for more than a year. First, the space, formerly a machine shop, had to be cleared out. Then, a large hole—about 16 by 45 feet in area and about 15 feet deep—was dug out to make room for a massive water pump and reservoir. About a dozen 30-foot, corkscrew-shaped posts were inserted underground to hold the weight of the new equipment. As one of the last steps before installing the flume, the steel support columns were erected.

"I came in last night and saw these columns for the first time, and I thought, holy tamales—this is going to be cool," Lamb says.

When the flume arrived, crews put it on rollers and gently nudged it along with a crane, working into the early afternoon to maneuver it into place at the back of the warehouse. Prior to the flume's arrival, workers from Facilities cut an eight-foot opening in a concrete wall to make way for the new addition. After negotiating the narrow passageway, the flume had to squeeze between the steel columns that supported the building. It was a tight fit, to say the least. (Watch a time-lapse video of the flume fitting into place.)

The flume will be able to tilt up to 15 degrees, allowing water, pebbles, rocks, and other sediments to stream toward the bottom, where the water is collected in a reservoir that can hold 20,000 gallons. An experiment will be able to run continuously, as a conveyor belt and water pump—capable of forcing 8,000 gallons per minute—bring the sediment and water, respectively, back to the top.

More parts of the lab will come in over the next few weeks, as it will take a couple of months to finish construction. Lamb says he's hopeful that the first experiments will run in March. "It's going to be really exciting," he adds. "We're going to observe things that nobody has ever seen before."

For more photos of the construction in progress, see the laboratory page here. 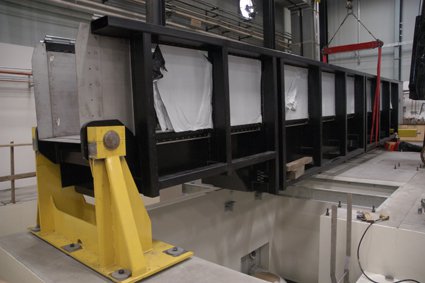 As the main component of the new Earth Surface Dynamics Laboratory, the flume fits snugly in place. Credit: Marcus Woo 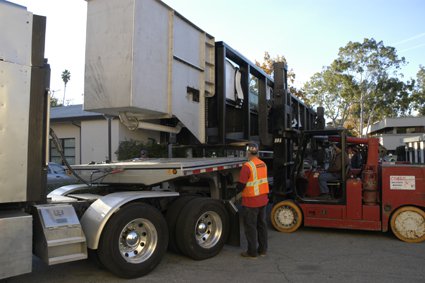 After a long ride from Wisconsin, the flume is unloaded from the truck. Credit: Marcus Woo
Image Lightbox
Subscribe
The Caltech Weekly