Skip to main content
Home  /  News  /  From Rivers to Landslides: Charting the Slopes of Sediment Transport

From Rivers to Landslides: Charting the Slopes of Sediment Transport

In the Earth Surface Dynamics Lab at the California Institute of Technology (Caltech) the behavior of rivers is modeled through the use of artificial rivers—flumes—through which water can be pumped at varying rates over a variety of carefully graded sediments while drag force and acceleration are measured. The largest flume is a 12-meter tilting version that can model many river conditions; another flume models the languid process of a nearly flat river bed forming a delta as it reaches a pool. Additional flumes are constructed in the lab on an as-needed basis, as in a recent study testing sediment transport in very steep channels.

One such newly constructed flume demonstrates that the slope of streambeds has dramatic and unexpected effects on sediment transport. Logic would suggest that steeper streambeds should allow for easy sediment transport since, as the angle of the slope increases, gravity should assist with moving water and sediment downstream. But experimental data from the flume lab show that gravity does not facilitate sediment transport in the expected manner. Furthermore, in very steep streambeds with a 22-degree or higher slope, sediment motion begins not with grains skipping and bouncing along the bottom of the streambed, but rather with a complete bed failure in which all the sediment is abruptly sent hurtling downstream as a debris flow.

"Most previous work was done on low-gradient channels with a gentle slope," says Michael P. Lamb, assistant professor of geology at Caltech. "These are the rivers, like the Mississippi, where people live and pilot boats, and where we worry about flooding. Low-gradient channels have been studied by civil engineers for hundreds of years." Much less attention has been paid to steeper mountain channels, in part because they are more difficult to study. "Counterintuitively, in steep channels sediment rarely moves, and when it does it is extremely dangerous to measure since it typically includes boulders and large cobbles," explains Lamb.

And so Lamb, along with Caltech graduate student Jeff Prancevic and staff scientist Brian Fuller, set out to model the behavior of steep channels on an artificial watercourse—a flume—that they created for just this purpose. They intentionally removed key variables that occur in nature, such as unevenness in grain size and in the streambed itself (in steep channels there are often varying slopes with waterfalls and pools), so that they could concentrate solely on the effect of bed slope on sediment transport. They created a uniform layer of gravel on the bed of the flume and then began running water down it in increasing quantities, measuring how much water was required to initiate sediment motion. Gradually they tilted the flume to steeper angles, continuing to observe when and how sediment moved as water was added to the system.

Based on studies of sediment motion in low-gradient channels, geologists have long assumed that there is a linear relation between a watercourse's slope and the stress placed by water and gravity on the streambed. That is, as the angle of the streambed increases, the quantity of water required to move sediment should decrease in a simple 1-to-1 ratio. Lamb and Prancevic's flume experiments did indeed show that steeper slopes require less water to move sediment than flatter streambeds. But contrary to earlier predictions, one cannot simply raise the slope by, say, 2 percent while decreasing the water depth by 2 percent and see the same pattern of sediment transport. Instead, as the flume tilted upward in these experiments, a proportionately greater amount of water was needed to initiate sediment motion. By the time the flume was tilted to a slope of 20 degrees, five times the depth of water as previously predicted was needed to move the gravel downstream.

At one level, this experimental data squares with field observations. "If you go out to the Mississippi," says Lamb, "sand is moving almost all the time along the bed of the river. But in mountain channels, the sediment that makes up the bed of the river very rarely moves except during extreme flood events. This sediment is inherently more stable, which is the opposite of what you might expect." The explanation for why this is the case seems to lie with the uneven terrain and shallow waters common to streams in steep mountain terrain.

Experiments with the tilting flume also allowed Lamb and Prancevic to simulate important transitions in sediment transport: from no motion at all, to normal fluvial conditions in which sediment rolls along the streambed, to bed failure, in which the entire sediment bed gives way in a debris flow, stripping the channel down to bedrock. The researchers found that with lower slopes, as the water discharge was increased, individual grains of sediment began to break free and tumble along the flume bed; this pattern is common to the sediment-movement processes of low-gradient riverbeds. As the slope increased, the sediment became more stable, requiring proportionately more water to begin sediment transport. Eventually, the slope reached a transition zone where regular river processes were completely absent. In these steeply sloped flumes, the first sediment motion that occurred represented a complete bed failure, in which all of the grains slid down the channel en masse. "This suggests that there's a certain slope, around 22 degrees in our experiments, where sediment is the most stable, but these channel slopes are also potentially the most dangerous because here the sediment bed can fail catastrophically in rare, large-magnitude flood events," Lamb explains.

Researchers previously believed that debris flows in mountain terrain primarily derived from rainfall-triggered landslides flowing into watercourses from surrounding hillsides. However, the flume-lab experiments suggest that a debris flow can occur in a steep river channel in the absence of such a landslide, simply as a result of increased water discharge over the streambed.

"Understanding when and how sediment first moves at different channel slopes can be used to predict the occurrence of debris flows which affect people and infrastructure," Lamb says. There are other, wide-ranging implications. For example, some fish, like salmon, build their nests only in gravel of a certain size, he notes, and so, "as rivers are increasingly being restored for fish habitat, it is important to know what slopes and flow depths will preserve a particular size of gravel on the riverbed." In addition, he adds, "a better understanding of sediment transport can be used to reconstruct environments of Earth's past or on other planets, such as Mars, through observations of previously moved sediment, now preserved in deposits."

The paper, "Incipient sediment motion across the river to debris-flow transition," appears in the journal Geology. Funding was provided by the National Science Foundation, the Terrestrial Hazard Observation and Reporting Center at Caltech, and the Keck Institute for Space Studies. 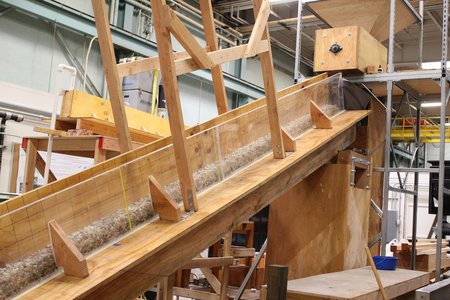 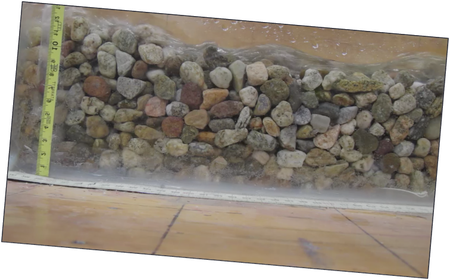 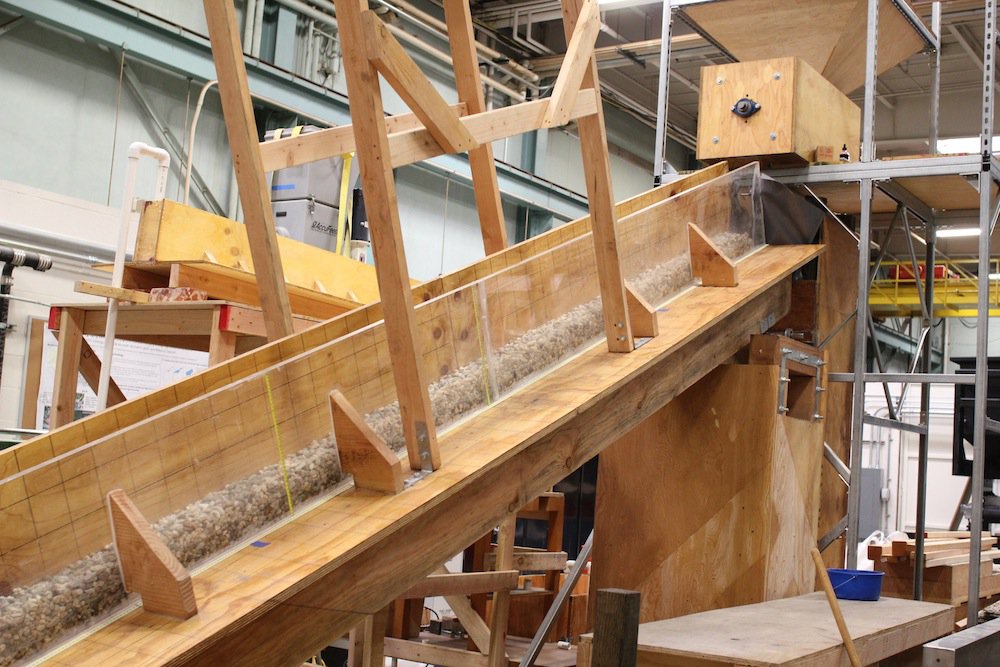 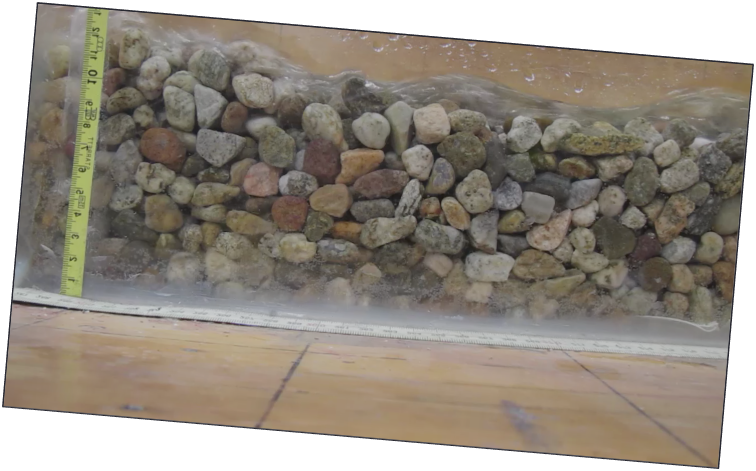